CELEBRATION OF THE INTERNATIONAL DAY OF THE AFRICAN CHILD 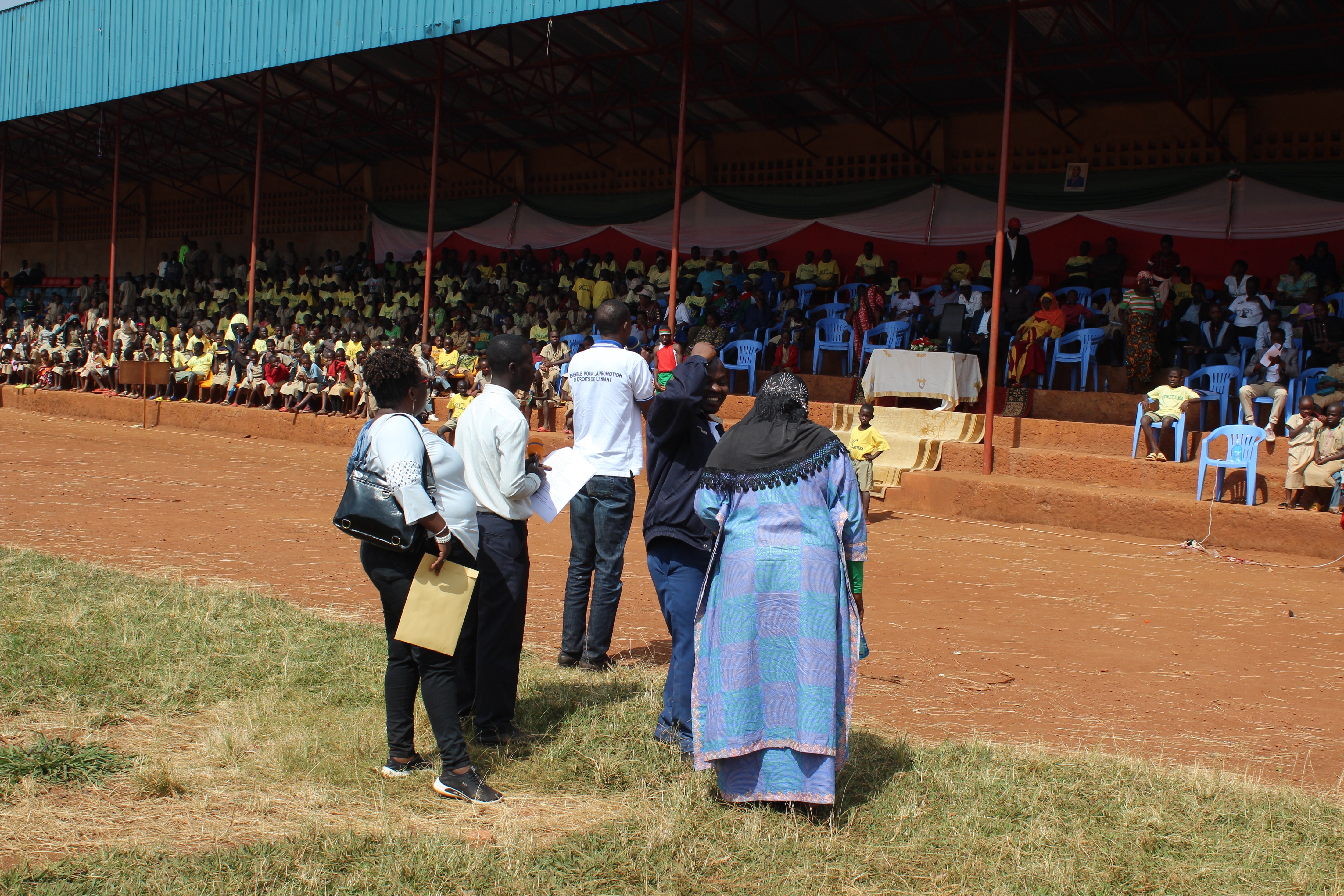 APDH, a non-profit organization born of a school club of human rights, seeks to contribute to the respect of human rights in general and of the child in particular. The International Day of the African Child is celebrated with the spirit of sensitizing, respecting and promoting the rights of the child in general and the African child in particular. This year in Burundi, the 16th was celebrated at the national and provincial levels at the AGASAKA stadium in Ngozi on Thursday on June 24, 2021 from 10:00 am. In their respective address to participants, the different authorities made mention of the need to promote, defend and respect the rights of children in all their forms. The games and plays played were also bearers of this message in their entirety.

Thus, as part of the implementation of its program "Support and promotion of the realization of rights, prevention and peaceful resolution of conflicts for the benefit of vulnerable populations", APDH had planned a presentation of interactive theater by student members of the CSDH from RUKECO Junior High school.

This theater was presented during the celebration, so that the students contribute, not only to the change of mentalities of the communities but also and especially so that these students, enjoy their rights as subjects of rights, in a community where equity and social justice are respected.

Several personalities and organizations were present for the celebration, among others the authorities from the provincial administration, the representative of the communal administrator of Ngozi, the President of the provincial children's Forum, the President of the child protection committee in Ngozi province, i.e. 12 participants and other actors working in favor of children in Ngozi province, including Terre des hommes, Foundation Stam, OIDEB, APRODEM-GIRIZINA, Eh 'Ikirezi, Giriteka Centre and Red Cross. Schoolchildren and students from primary and secondary schools around the city of Ngozi were invited and the celebration began with a parade by them.

In their words of address, the different authorities made mention of the need to promote, defend and respect the rights of children in all their forms. The games and plays played were also were bearers of this type of message in their entirety.

Through role plays, the message was to bring parents and authorities to understand the social issues that threaten the dignity of children and take the right decisions to improve the protection of children's rights and to help children and youth become actors of change in their communities.

As the festivities coincided with the special day dedicated to African children, a question and answer session on children's rights was organized by APDH with prizes for those who answered best. The questions were asked in public, and the children who answered better received different prizes that they appreciated very much. These included buckets, toilet soaps, laundry soaps, registers, loincloths and a radio for the finalist winner. 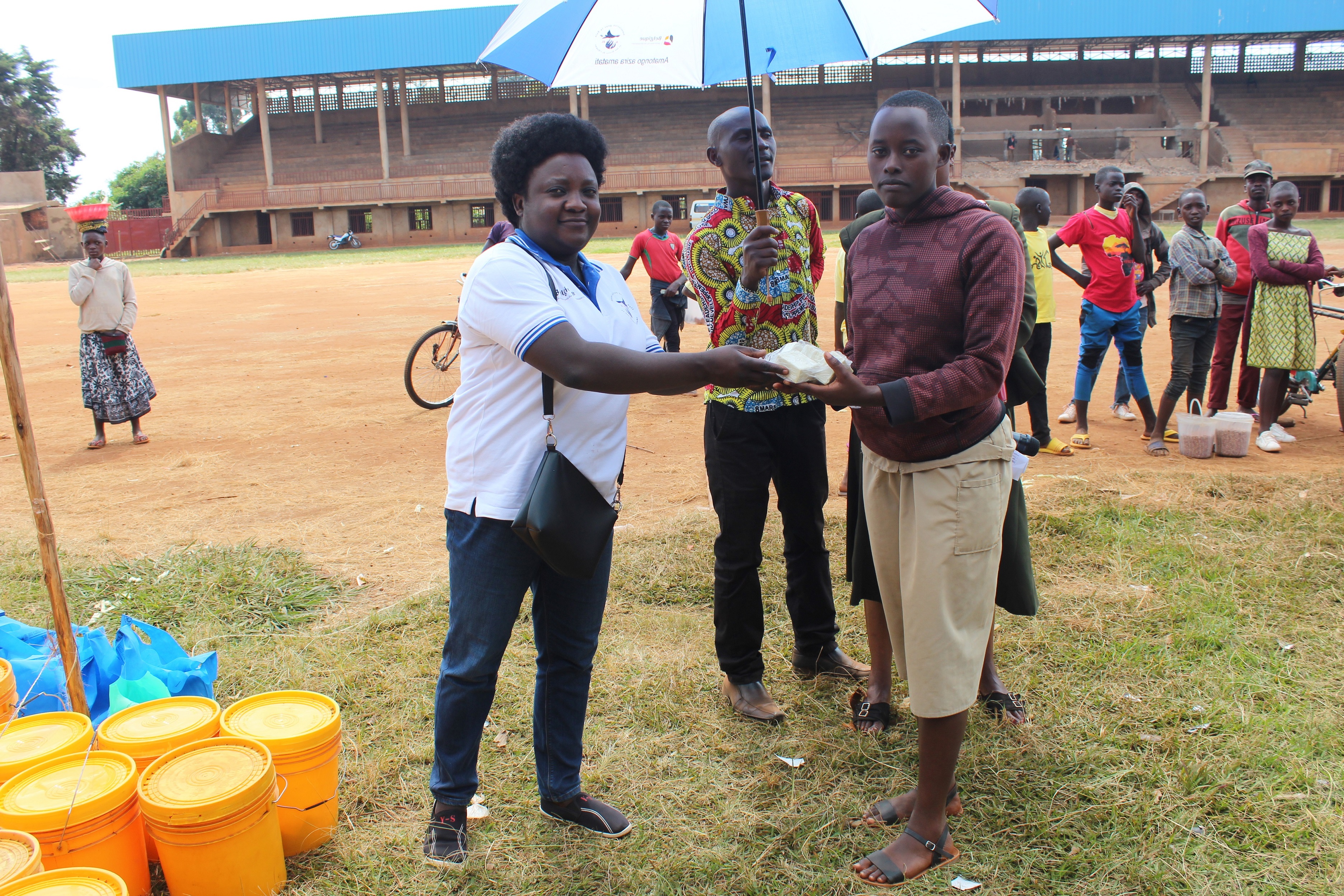 One cannot say how important it is to know that the land you are exploiting really belongs to you. In its interventions, APDH is always pleased that the population is increasingly aware of the importance of certifying their land within the communal land service. The commune of Kirundo is one of the communes in this province to have a communal land service, which will soon be operational. Since its creation by a deliberation of the commune council, APDH, through its project “Projet d’Appui à la Gestion Foncière”, has always provided technical support and advice to the community.

The community sensitizations accompanied by APDH are normally in line with this collaboration and support. The session took place from June 16 to 18 and June 23 to 24, 2021, in 29 local areas of the commune and will contribute to a good understanding and knowledge of the importance of land certification. As a result, land conflicts will be greatly reduced and social cohesion within the communities through certification of their land properties will be improved.

During their stay in all these areas, APDH agents in collaboration with the commune's staff, were able to notice that the majority of the population was not yet aware of the existence of this service nor of the modes of acquisition of land property and the importance of certifying them.

After each session, with the help of APDH agents and commune staff, the population proceeded to the election of the members of the “CRCs” (comités de reconnaissance collinaires) who will assist the commune staff in the recognition of land properties in the local areas.

This activity was much appreciated by the population given the fact that the steps to certify their land were understood and are not on a demanding level.

In many areas, women responded massively and generally showed an interest in knowing their share of responsibility in the management of land properties, especially those acquired by purchase, as well as their certification. In addition, it is noticeable that they presented themselves as candidates to the election because, as they say, "being part of these committees will allow them to closely monitor activities related to the securing of land ownership for families for which they are co-responsible.

During this activity, APDH's observation is remarkably satisfying. The population understands that with the land certification, the land conflicts that are manifested in the community will largely diminish while claiming their progressive disappearance.

No doubt, land certification is now of primary importance in the process of proving land ownership in Burundi. Many of the communes in the different provinces of the country are now equipped with functional communal land services with staff and ‘CRCs’ that are up to the task

Since the commune of Kirundo via its communal council deliberated for the creation of the land service, the latter was not yet functional due to the lack of setting up and training of the members of the ‘CRCs’. On this day, the 14, 2021, APDH is pleased that the CRCs have already been set up on all the municipalities of the commune and their capacities have been built especially on the ethics of their tasks. Soon the staff of the communal land service will be complete, as the communal administrative authorities have admitted.

In close collaboration with the newly established CRCs, we have no doubt that the work of land certification in the commune will begin soon and will be done well, with a major effect on the increase of the communal fund, the socio-economic development of households and the improvement of social cohesion in the community, and this will have a positive influence on the reduction of conflicts in general and land conflicts in particular.

The CRC is normally made of 7 people per municipality from 3 different categories, including local elected officials (3), people of integrity (3) and a representative of the communal administration (1) as specified in article 394 of the land code currently in use in Burundi. The latter must have a minimum knowledge of land management and the functioning of the communal land service in order to carry out their mission properly. It is with this in mind that APDH is organizing this training for them and will continue to intervene in capacity-building as much as possible and needed.

The session took place in two sites where two zones met per site to facilitate participation: Cewe and Kirundo rural zones met at ECOFO Munzenze on one hand and Kirundo center and Gikuyo zones at ECOFO Gikuyo on the other hand. The objective of the session was to give the necessary capacities to the members of the land recognition commissions on some key concepts of land management and to exchange on a better  ethics that should characterize a member of the commission and to propose sanctions in case of violation of the pre-established principles.

During the session, participants understood their role, the values and morals that should guide their work and the different stages of land certification, but also, they were able to acquire a minimum of knowledge on the functionalities of the communal land service and this will allow them to better assist the population that needs this service so urgently. They also understood that this work is of a voluntary nature and requires a sacrifice from them that will germinate the spirit of consolidation of peace and reinforcement of rights in the families and grassroots communities.

The participation was massive because all the municipalities were represented almost to the maximum, except for some cases of the representatives of the administrator who will be changed because; a member of the commission must be a resident of the area.